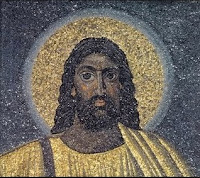 From Karen Armstrong, the great transformation regarding Jesus:


Hello my name is Jesus although I was known as Yeshua back then. I was real flesh-and-blood colored man, not the blond-haired blue-eyed fiction ever since.

I owe my life to 3 virtual community members that enabled me to become the Soul I needed to become, John the Baptist, Isaiah, and Amos.

If you are one of my sisters and brothers pictured on this site you probably know me quite well. But if you are not yet among these one in a million at this site then who you know probably quite well is my polar opposite,  my evil twin,  that I have been fighting with every breath all of my life to defeat. He is the child of scribes and Pharisees that killed me,  and of every generation of their children for the last 2000 years, the white, blue eyed, blonde haired fiction. No I am NOT the white European American supremacist colonialist elitist fundamentalist fear monger that you almost certainly have had inflicted on you. Based on scholarship this is an honest attempt to identify what I did not say or stand for or believe but that has been put in my mouth.  Link

For maybe 100 years or so after they killed me there were people that understood me and my message and embraced it and lived it. The primary evidence of this can be seen in the fact that your scholarship correctly identifies that I actually spoke only something like one third of the words attributed to me in your gospel.  another third of those words were put in my mouth by allies of my evil twin.

It is actually not clear whether the group called John that wrote the last of the so-called gospels, it is not clear whether it was that group or those who translated that group that perverted it two words of my evil fictional twin. the confusion being that Leo Tolstoy who totally nails my message found most of the truth he sees in the Greek original texts of Johns gospel. But your English version of John starting with King James is a profound inversion corruption destruction of my message as it is translated there and as the church,  the temple of the scribes and Pharisees in modern day interprets that gospel.


Gandhi held up my life and words as the greatest example in history of what it meant to be a healthy human Soul or LSGIA  Being.


The closest idea of who I am and what I stood for is found in the last 40 years of Leo Tolstoy's writing and best encapsulated in his The Gospel in Brief, the Isabella hapgood translation.


Also very good is the output of the Jesus seminar especially as published by Dominic crossan.


Next to Tolstoy’s  gospel in brief the closest you can see who I was and what I said is by deeply grasping the work of the Jesus seminar and then including other things attributed to me in the four gospels that are consistent with what I said. As earlier I said to you for 100 years or so there were people that understood what I was saying and embraced it and lived it and they did a lot of good work to express in very useful ways who and what I was and what I was trying to teach.

Theirs is an attempt in their own words and their own understanding to make of their lives an answer to the question and call of God.  this is the unifying defining factor of all of the LSGIA Beings, all of the faithful children of God by that inadequate word God, and that is what you were born as.

And if you are fortunate enough to re-establish that part of you in charge of every breath in your life then to the degree which you succeed you personally will experience every breath the joy and peace of heart that I died to give you and you will also be bearing the pain of the world cuz that's what the LSGIA  being does and you will draw the hatred and scorn and persecution of this totally lost world unless and until the LSGIA  being in enough of us reigns  in our lives and causes it thereby to be in vogue and reign  in an ever increasing number of people,  thus becoming their way of seeing who I am and what I had to say.


The words that indicate that I attempted to make of my life purely a vehicle for God,  God being better articulated as the LSGIA Being,  they are absolutely correct.

So I am purely a dual revolutionary. I waged the revolution to free you from unnatural enslavement by your spirit of head and flesh,  to free your LSGIA  Being to be in charge of your every breath. And in doing so I waged the only Revolution that can change the way things are on earth fundamentally from one where each person and group tries to oppress the other and exploit the other, to one where Universal family is the means by which people interact serving their sisters and brothers not exploiting them.