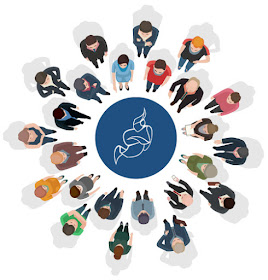 It is that simple, and it is that hard.
We absorb our community like a sponge absorbs water. It is inescapable and unavoidable.

But what is under our control if we learn to exercise it is what we pay attention to and therefore what comprises our community.

Would you allow just anyone to put something in your mouth? You would not. And yet rarely do we determine what our environment puts in our nervous system, in our attention, and we digest and become that to which we pay attention.

The LSGIA being Within metabolizes LSGIA  beings without when it is brought in contact with them. Jesus metabolized John Baptist, Isaiah, Amos. Gandhi metabolized Jesus Through the writings of Leo Tolstoy, and also metabolized unto this last by John Ruskin. And so it goes with all on this page.

Exactly the purpose of this site is to introduce you to your relatives , the relatives of your LSGIA  being Within.
If you use this, if you make of them your community, you will be at most one in a million souls. It is quite extraordinary how profoundly unlikely it is that anyone will take this opportunity.

We want the revolution desperately, but not enough to be the revolution. I could have saved a thousand more if they knew that they were slaves, said Harriet Tubman.

Maybe the clearest look at the truth that we are our community is from the organization search Institute. Org, known by many many many affluent communities with the resources to use that group to inform their attempt to make their Community as healthy and productive and safe for their biological children. This research based organization years ago did the work to look at all the socio demographics and determined that environments rich in 40 characteristics, called assets, were near perfect in their ability to produce children with extremely desirable outcomes. And those environments  poor in those assets were extremely likely to produce almost all the children with extremely undesirable outcomes.  https://www.slideshare.net/mobile/SearchInstitute/power-ofassets-slides-for-web-rev

Abraham Maslow's research revealed this a different way. His research discovered that there is a hierarchy of needs and if the needs at the lower level are thwarted, if the person is starved for those needs being satisfied then what here is called the LSGIA  being is likely to be stunted and possibly never really emerge. 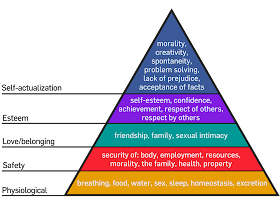 A final way of seeing what really should be obvious all along is in the highly popular book several years ago, Chasing The Scream. The book centers around the deeply influential and widely known rat research of many decades ago. That experiment jumped on by the US government and accepted by everyone was what happens to a rat placed in a cage with water and water that is laced with Heroin. As everyone would know the rat takes the heroin to the point that it kills itself. What the book, Chasing the scream, popularises is lesser-known research that occurred not too many years ago where another researcher said, well, the availability of heroin is not the only thing going on here. The rat is in a cage. That is not a nurturing environment for a rat. And when the researcher placed a rat that was even extremely addicted in a cage which was rat Park, rat toys, rat friends, rat food, and still regular water and water with Heroin the rat rarely took the heroin water and was quickly cured of its addiction.

This website is probably the best Opportunity by far that any will ever have to revolutionize their environment by making the study of the people here deep intimate thorough such that it seeps into every pore and revolutionizes their being. And in doing so they become a little piece of that Revolution for those in their environment.